Our 🌈  babe has taken her first trip around the sun🌞

ONE whole year of pure joy and delicious smiles and your wondrous music and the best dancing EVER.

Edie Lavender, you are made of magic ✨

We love you more than you’ll ever know, our precious wild child🌿
✖️✖️✖️ 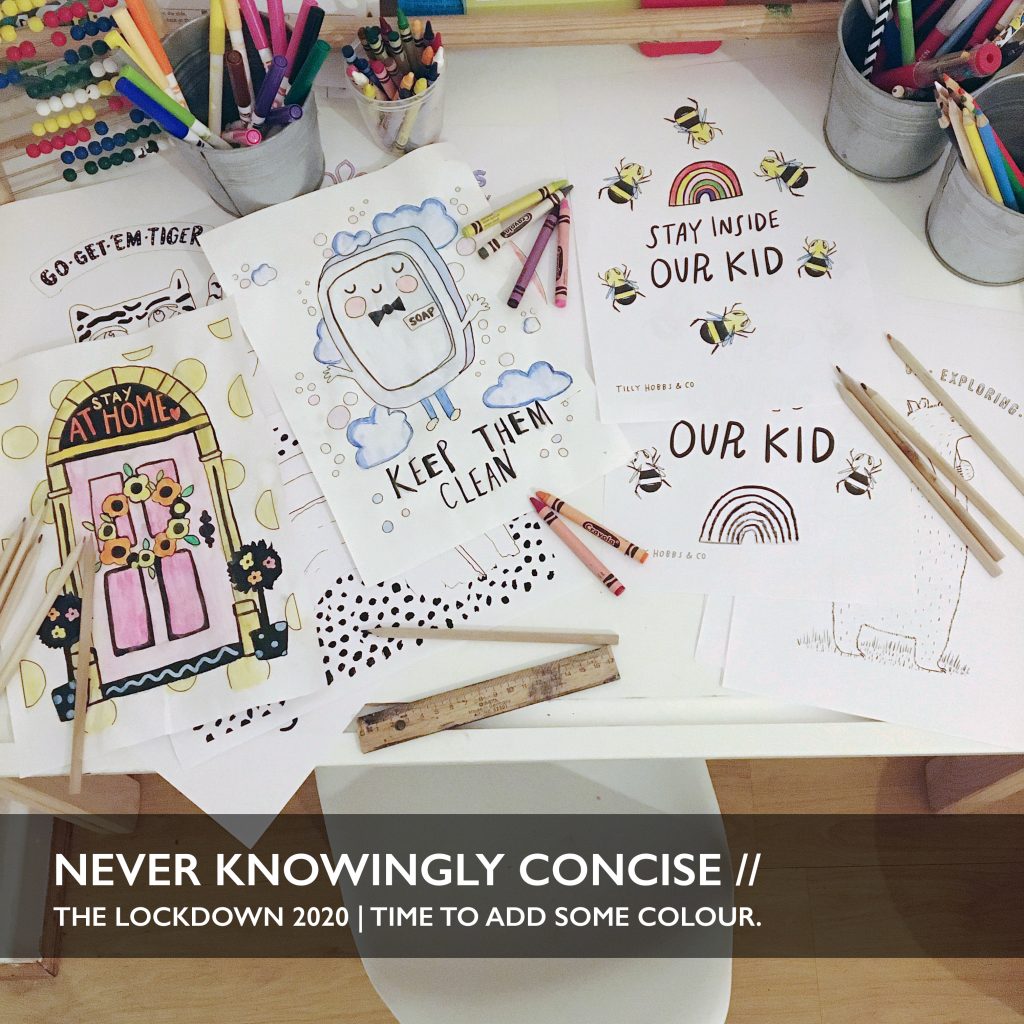 We’re currently in lockdown, here in the UK, and while the weather has been pretty good (now thats unprecedented!) the kids always need something to keep them occupied during that rare and scarce downtime. As so many of us are working from home or have other children that require more 1:1 care, colouring sheets are vast becoming something of a life-saver and a bit of routine too!

We’ve found colouring sheets really fun – they’re also a great way to encourage a little bit of mindfulness. A bit of time to zone out. I’ve personally done my fair share of colouring sheets too – when printing out one too many for Eli. A lot of our favourite small brands and businesses have created their own colouring sheets, printable, and for free, using their signature styles and branding. Some of these sheets are perfect for colouring and popping up in your windows to brighten the day of your neighbours and those passing by. Some of these sheets might also be nice to colour and send to those that you’re missing or as a little “hello” note for neighbours or perhaps (like us) you have a local nursing home that are accepting artwork to spark a little bit of joy for residents.

Also, just to add, these colouring sheets are predominantly aimed at the kids, but let’s not lie to ourselves when we say that “we’re printing them for the kids”. Because they’re really good when you’re a fully fledged adult too. Whatever that is…

Without further ado, I have compiled a list of all my favourite colouring sheets so far. I’ll continue adding more as they crop up.

Enjoy colouring – and let me know which you’ve done!

—
I first saw this jumper around 2 years ago. It was being adorned by the likes of Kate and Alexa; and like my favourite fashion-people I’d also lusted after the monochrome version of the now infamous 1970 slogan jumper. Much to my family and mates’  dislike, we’re big fans of the 1970’s. Fans of the fashion, music and most predominantly, the design and (Mid Century) interiors of the era. So this jumper struck more than *just* sartorial chord with me. But then I saw a Telegraph article on (aptly named) jewellery designer Sheherazade Goldsmith, and she was wearing a red version of my favourite woollen piece. Be still my beating heart…

So from then, I lusted for the red colourway. The super-soft Merino Wool. The cut and design. The design itself takes its signature motif from a book clipping that Freud used to wear pinned onto a plain jumper.

So the red 1970 Jumper by the lovely Bella Freud is firmly on my NEED list. More or less at the top.

If you so desire, you can own this seemingly cult classic by clicking the link here: Bella Freud at Selfridges.com

Which colourway would you go for?

Freud was born in London, England. She is the daughter of Bernardine Coverley and artist Lucian Freud and great granddaughter of the inventor of psychoanalysis Sigmund Freud.

She is renowned for her signature jumpers Je t’aime Jane, Ginsberg is God and 1970. Fans of Bella Freud include Alexa Chung, Laura Bailey, Kate Moss and Alison Mosshart.

Bella launched her eponymous label in 1990. Her first collection featured sexy knitted dresses in bookish colours, mini tailored suits and a small selection of shoes and bags. Bella went on to win Most Innovative Designer at the London Fashion Awards in 1991 and produced a Super 8 short film ‘Day at the Races’ as an alternative to a fashion show. Bella’s second film ‘More Clothes’ directed by Kate Garner was shot on 35mm film and showcased the SS 1992 collection.

From March 2000 to 2003 Bella consulted for British heritage brand Jaeger, rejuvenating their image and bringing British dressing to a younger audience.

2013 also saw the development of the RTW collections and expansion into the beauty market. The Bella Freud Eau de Parfum collection was launched in 2014 and has gained a cult following.

A few months ago I decided I wanted to be back blonde. Truth be told, I was bored with my dip dye; despite it being very low-maintenance. I thought it might be nice to be a ‘natural’ blonde – something along the lines of Sienna Miller. After 6 boxes of home dye I realised it just wasn’t going to happen. And now I had weird wishy-washy dip dye. YACK.

“Why didn’t you just visit a salon?”, I hear you ask. Well, juggling Mr Eli, work, driving lessons (yes, I am 10 years late to the game) and sorting out the day-to-day running of your family home does not leave much time in the way of pampering. (In fact, it leaves zero time!). I’d dyed my hair on an evening once Eli was in bed and Mr Memoirs could tend to him while my hair “developed” – albeit, it didn’t develop into much as I previously mention.

Fed up – I came to the decision that I now wanted to go back to my roots.  The platinum (with an old ladies blue rinse mixed in for good measure) me. The old me.

I’d seen LOADS of hype about BLEACH London. The salon itself residing in WAH Nails on Kingsland Road, was masterminded by Alex Brownsell (super hair colourist extraordinaire) and Samantha Teasdale (brains behind the business – also a one time friend-of-a-friend and Teasdale Twin to Louise; the actual live-in hair stylist for One Direction).

BLEACH London have done incredibly well – obviously helped along by their insane black book of celebrity clients, of course – but they have only been open just over a year. The salon prides itself as the first people to recreate the Ombre look. A BLEACH London dip-dye is not for the faint hearted, think rainbows and My Little Pony. Just amazing unconventional dye jobs – that also remind me of Kate Winslet’s character, “Clementine Kruczynski”, in Eternal Sunshine of the Spotless Mind (one of our all time favourite films, EVER!). You also won’t fail to notice that BLEACH London cleverly names itself after it’s speciality (bleaching, and lots of it) and after the Nirvana album (which famous font they also share).

Back in October, BLEACH London launched a range of vibrant dyes, treatments and styling products to Boots.You can purchase in store and online at Boots.com, choosing from colours such as Awkward Peach, Washed Up Mermaid and Bruised Violet. All products in the range cost under £10; which is ridiculously good, considering!

I purchased two boxes of the Total Bleach and a box of White Toner (in the 3 for 2 at Boots). I have used both boxes of bleach and the White Toner and this is the current result:

I absolutely LOVE the Total Bleach. It smelt like really strong peroxide as I was mixing it and took my breath away at times – but the consistency is great. It goes on fairly easily, but would recommend you buy two boxes for hair longer than mine as it doesn’t stretch too far. Within the Total Bleach box you also get a mixing bowl, mixing brush and gloves. In both the Total Bleach and White Toner boxes you also get a tube of the amazing Reincarnation Mask; which I was going to purchase on it’s own anyway. The tube states to keep the mask on for up to 20 minutes or so; but twice now I’ve left the conditioning treatment on my hair for a few hours and kept it covered with a shower cap. This has DEFINITELY rescued my poor hair which has been through the mill, to say the very least!

BLEACH London is my new favourite bleach. It feels like it is very kind on my hair and it actually feels in a much better condition now than it did before I started the bleaching process. I’m so so happy with it. The colour is even and has a lovely shimmer, which I didn’t get with the previous brands I’ve used to achieve this same colour. I’m also using the following BLEACH London products:

BLEACH London Reincarnation Mask, £6.00 – Boots.com
This mask smells so so nice – almost like Men’s aftershave; not your usual fruity scent. My hair has a shimmer and feels so much stronger and less dry. I will be using the mask once a week to keep on top of dryness and damage.

BLEACH London Silver Shampoo, £5.00 – Boots.com
I have used several ‘silver’ shampoo’s in my time as a platinum blonde – but NONE of them compare to this one from BLEACH London. Again, it smells divine and took every tiny bit of yellowy tone that was present away. It’s made my hair very ashy, which is the look I was going for! Careful though, this could make your hair pretty blue if left on too long. I would also recommend that your alternate using different shampoo’s to avoid toner build up; which will definitely result in blue hair (unless thats what you’re wanting of course!).

BLEACH London Split Fix Serum, £6.00 – Boots.com
I’m finishing my hair with this incredible serum. I’ve tended to avoid things like this previously as they can be overly greasy and do more harm than good. But not this Split Fix Serum! This serum is amazing, it is controlling my hair like nothing else, fights frizz and fly away – without weighing my hair down. It also has that wonderful scent to it. I’ve been using this serum both on towel dried hair and on dry hair to tame those fly aways.

I seriously cannot recommend the BLEACH London range enough. I’m shocked and surprised at how good each and every product is – I’ve seen amazing results of their rainbow home-dyes too. Check out their Instagram for updates from their many happy customers! @BLEACHLondon.

Would you dare to experiment with the BLEACH London range? Would love to see your results!