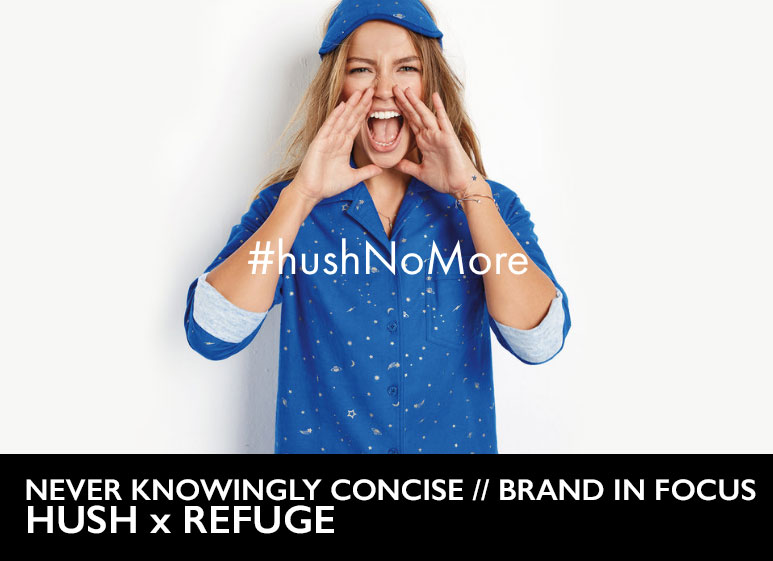 One of my favourite brands, HUSH, has joined forces with the charity REFUGE to create a beautiful sleepwear set; which will see all profits going directly to the charity.

HUSH say, “This season we are proud to support Refuge and their commitment to achieving a world where domestic violence is not tolerated and where women and children can live in safety”.

Together, they have created the NIGHTSKY limited edition sleepwear set with matching eye mask; the proceeds of which will all be donated to Refuge – with every set sold providing the equivalent* of one night in a safe house for a woman and her children. The set retails at £60, so for every purchase, a MASSIVE  £52* is donated by HUSH to Refuge. ​​

Some shocking statistics were highlighted for this campaign :

The work that Refuge do is crucial in saving lives. So while this is a really beautiful sleepwear set, I think you’ll agree, this truly is a life-saving and life-changing purchase.

Please support this tremendous cause by sharing across social networks, using the hashtags,  #hushNoMore and #OneforOne, and if you can purchase the sleepwear set,  you really will be making a difference to the lives of many.

0808 2000 247
Run in partnership between Women’s Aid and Refuge
If you are experiencing domestic violence and need support please visit www.refuge.org.uk